A MARTIAL ART FOR THE MIND

From stylists to stars, here’s why people are Kung Fu fighting. 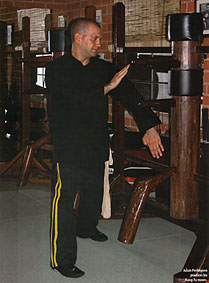 When stylist and cutting instructor Julian Perlingiero began a quest to increase his focus, concentration and perfection, he found powerful enlightenment in a new (yet very old) martial art called Wing Chun Kung Fu.  Little did he know that it would add so much to his salon and teaching work, and that he would end up training with Hollywood celebrities like Robert Downey, Jr. 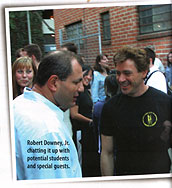 “Teaching or working in the salon requires stamina and an ability to focus and connect,” says Perlingiero.  “I was attracted to martial arts because of the physical training element, as well as the philosophy.  After training for just a few days, I began to feel more relaxed and found my salon and teaching work even more enjoyable and helpful.”

Actor Robert Downey, Jr. feels the same way.  He works out at the exact same Wing Chun studio and often spars with Julian.  As Downey said in a recent Los Angeles Times article, he credits Chief Instructor Si-Fu Eric Oram (who was trained by Bruce Lee’s trainer Grandmaster William Cheung) with helping preserve his well-being, and even brought him to the film set for support.

Perlingiero now divides his time between the salon, instructing cutting techniques for top brands, and working as an assistant instructor at the Wing Chun Kung Fu studio in West Los Angeles.  Many stylists

will recognize Perlingiero from his years as a creative director with Vidal Sassoon Schools and Academies.  Over the years, Perlingiero has travelled globally, conducting platform and style presentations, and even working directly with Vidal on several projects.

“The similarities between cutting and Kung Fu are remarkable,” says Perlingiero.  “They both require a connection to the other person, the ability to anticipate what the

y want or are going to do, coordination with hands or scissors, and the desire to improve.” 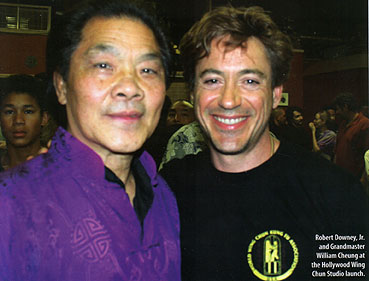 The origin of Wing Chun can be found in the turbulent, repressive Chinese Ching Dynasty, which flourished more than 270 years ago.  When all weapons were outlawed by the Manchus, the Hans began training a revolutionary army in the art of Kung Fu.  The Sil Lum temple became the secret sanctuary for preparatory trainings of a classical style which took between 15 to 20 years for each person to master.  To develop a new form, China’s grandmasters developed training programs that would develop an efficient martial artist in 5 to 7 years, a third of the original time.  Wing Chun trains people to use energy efficiently.  “It is not the stereotypical form of breaking boards or limbs,” says Perlingiero, whose enthusiasm for Kung Fu is contagious.  He has recruited dozens of fellow style professionals to take part in classes, including several from Vidal Sassoon salons and the Academy.

“It is all about mastering your skills,” says Perlingiero.  “I encourage everyone to look at options like Kung Fu to improve themselves and their work”.